Sometimes, you just want to focus on what you're writing. You don't need toolbars, you don't need tabs, hell, you don't even need menus. Using full screen mode in a standard text editor is a good start, but it's generally not as minimalist as it could be, and the text is all bunched over on one side of the screen.

So what options do you have? If you're on a Mac, you can use WriteRoom, and which has a Windows clone called Dark Room. Other options are PyRoom, JDarkRoom and Vroom. These are all great for editing prose, but none support editing LaTeX, let alone code.

If, like Mark Pilgrim, all this makes you wonder why someone would want a text editor with no features, then I do suggest giving one of them a try, it's a pleasant experience.

Prompted by a suggestion on the forums, the current beta supports this very style. In this setup, there's nothing at all on the screen but your text in the center, and a muted scrollbar on the right. The cursor doesn't even blink. You can think of it as WriteRoom for Windows, with regular expressions, Python plugins and code editing.

Here's a screen shot of it in action: 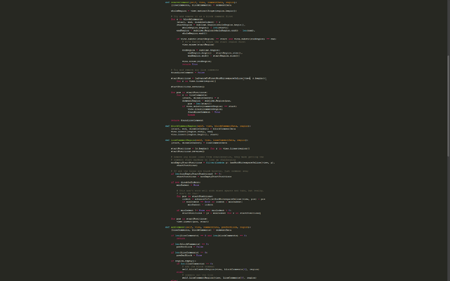 Unlike multi pane editing, the objective here isn't to fit as much information as possible on the screen, but to block out everything that you don't need right now. It also works seamlessly with multiple monitors, with each one able to edit a different file in a similar fashion.

[Edit: this is included by default in the latest versions of Sublime Text. Press Shift+F11 to try it out for yourself]